The mechanics of uninterrupted energy, summer edition: a seasonal advertising campaign of the energy brand NON STOP™ has been launched

The beginning of summer frees up all the hidden reserves of energy, and it splashes out with bright colours of fresh creativity. In the first days of June, NON STOP™ has launched a new advertising billboard campaign in the big cities – Kyiv, Odesa, Dnipro, Kharkiv, and Lviv. From now on, dynamic, lively, colorful billboards, scrolls and citylights will remind the city residents throughout June and July that the source of uninterrupted energy is always nearby.

The image depicts a grandiose mechanical object with the exact interaction of all elements – gears, chains, and conveyor belts. This is a metaphor for our daily life, which consists of a million unimportant things, and it is important not to get confused and stuck among them. A can of NON STOP™ is the very battery that powers the entire complex multi-component unit, helping all processes take place in a balanced, methodical and consistent manner. It is the famous perpetual motion machine that “Moves your day”, as the slogan says. 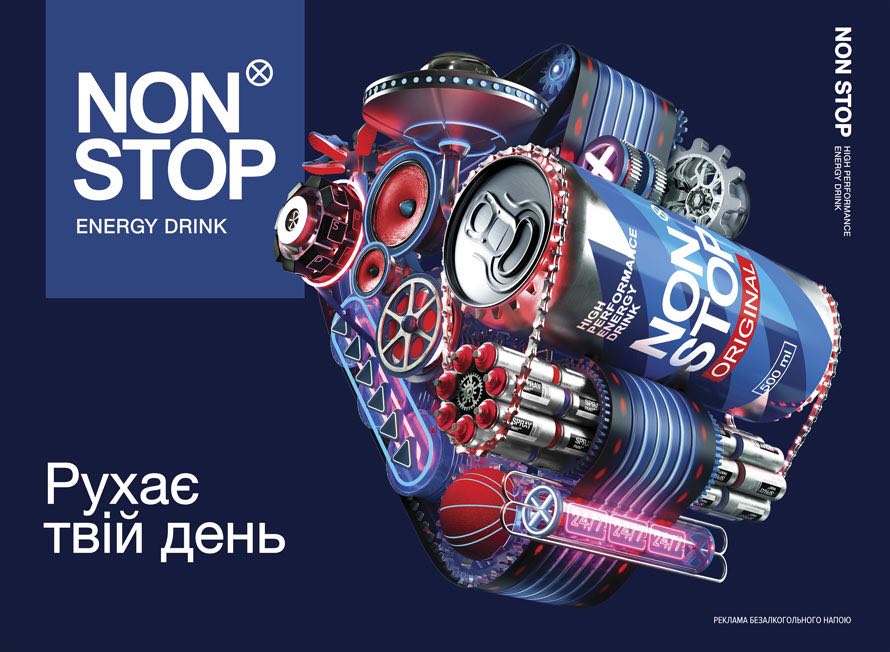 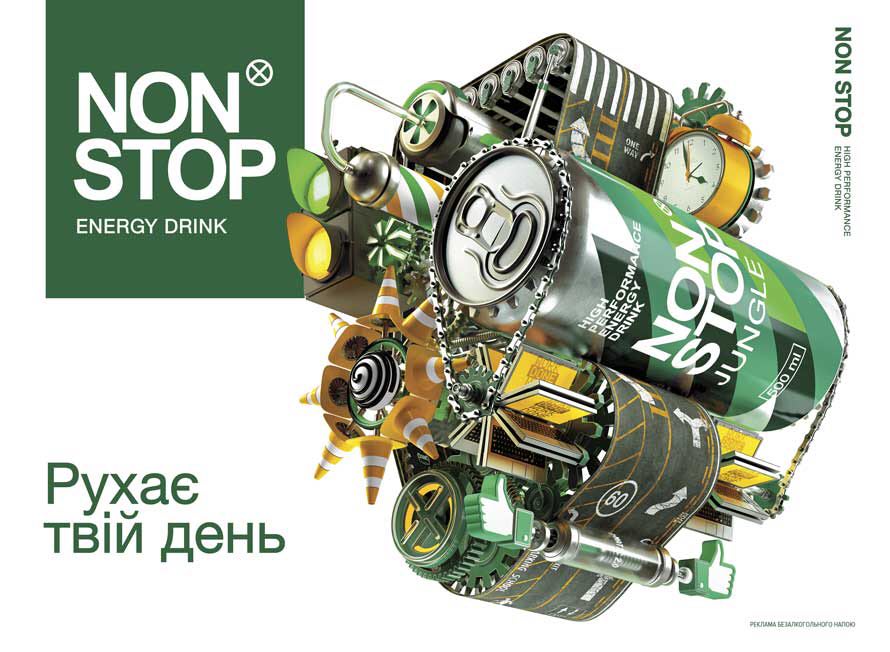 Soon, a series of NON STOP Original and NON STOP Jungle commercials will start on the national TV channels: Novy Channel, ICTV, STB, OTSE TV, M1, and M2, as well as on the Internet – in particular, on Youtube, Facebook, and Instagram. The intricate mechanism of the tireless NON STOP™ generator will come to life in even more fascinating dynamics of a video.

A well-known creative agency TS/D (Tough Slate Design) worked on the visual concept of the promo campaign – they were the authors of the renewed concept for NON STOP™ Urban / Jungle, which saw the world in the spring of 2018. The team also created the previous series of NON STOP™ videos, which embodied the idea of the uninterrupted energy of the legendary functional drink.

TS/D (Tough Slate Design) has already had more than one success story in collaborating with New Products Group. Recently, thanks to this creative collaboration, the creative agency became the gold medalist in the national competition Ukrainian Design The Very Best Of, the awards ceremony for which took place in Odesa on May 30 of this year. Their unusual Absurd Video for the brand WHY NOT™ won in the Motion Graphics of Advertising Spot nomination, receiving the highest score from an expert jury.

“We are pleased that our creative partners helped us visualize such a romantic mythical image as a perpetual motion machine. Like the energy drink NON STOP™, it symbolizes the tireless desire to develop, to achieve success, to appreciate every moment of life. The visual detailing of the unit fascinates the onlooker, which in itself already holds an effect of psychological relaxation. Locomotive pistons, road markings, alarm clocks, laptops, and barber poles hint that with NON STOP Jungle we can work and travel actively, overcoming the urban jungle routine with enthusiasm. NON STOP Original on a dark background sparkles with neon lights and slot machine panels, pulsates like speakers and springs like basketball balls, carrying a message that the energy drink helps to actively play and relax at any time of the day”, – commented Boris Tkachev, the Strategy and Research Director of New Products Group.

NON STOP™ is a drink for those who find 24 hours in a day too little, who are busy working or studying during the day and look for adventure at night. The new energy of Urban / Jungle is the energy of a big city, tangible around the clock, because the metropolis never sleeps. The entire line is optimized to be a source of energy, strength and intelligence. Due to the increased caffeine and taurine content in combination with the NON STOP™ vitamin complex, it quickly provides a tangible surge of strength and energy, increases physical endurance, mental concentration, reduces fatigue and improves the emotional state. NON STOP Original is a classic energy drink which has been a favourite of active city dwellers since 2005; NON STOP Jungle with strawberry and mint provides an uninterrupted work rhythm throughout the day; and the raspberry-acai and schizandra extract flavour of NON STOP Urban is perfect for endless night adventures.