The 3×3 format is the zenith of the third season of Pit Bull Fight: the ultras giving us hell in the cage!

“I’m looking forward to 3×3 more than my birthday!” – writes a follower in the official Pit Bull Fight community on YouTube. Yes, everyone was expecting this event: from middle managers to ordinary guys from the streets who traded chaotic bursts of energy for cool sports ambitions, fraternal spirit and the thrill of the fight within the bounds of the octagon and ethics. Today at Pit Bull Fight III there is a hot 3×3 punching party. The main characters are Puncher Boxing Club (Kyiv) and Academy MMA (Minsk). Dramaticism and risk multiplied by three, so take an energy-boosting sip of PIT BULL™ and enjoy! 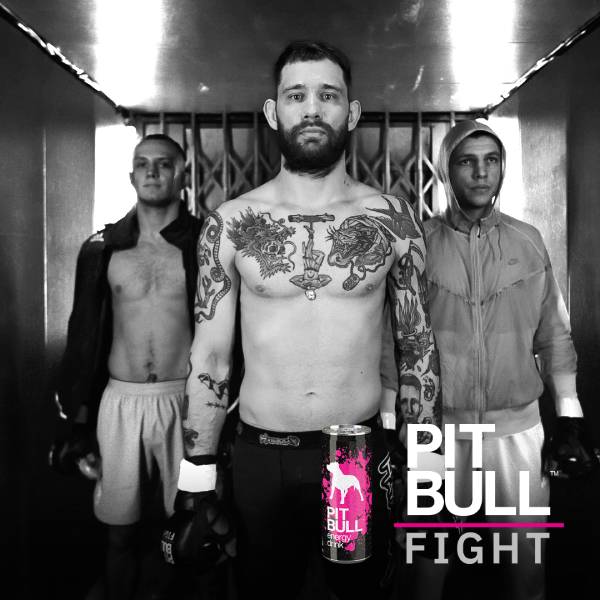 The Ukrainian team has the following warriors. Robert Vorobiov, 29 years old, master of sports in wushu sanda, purple belt in jujitsu. A football hooligan from Mykolaiv, a charismatic and strong-willed fighter. Yegor Kostyuchenko, 22 years old, world champion in MMA-2019, four-time champion of Ukraine in pankration, champion in kickboxing. One of the best in the Dynamo Capitals ultras gang; street fights turned him into a universal soldier. Dima Gritsenko, 23 years old, a professional MMA fighter with numerous regalia. Moved to the capital from the small town of Shepetovka. Went into sports to prove to all skeptics that he is a world champion!

The Belarusians arrived in Kyiv with a very strong lineup. Vlad Mishkevich, 26 years old, international master of sports in pankration. He dropped out of school, went through the “school of life” in the army, and proved to everyone who considered him a mediocre fighter the opposite! Pavel Masalsky, 26 years old, world champion and master of sports in MMA of international renown. This champion from Minsk was nicknamed the Kind One, but in the cage he turns into a real beast! Roman Rozhkov, 28 years old, champion of the Baltic Cup in MMA, medalist of the Championship of the Republic of Belarus in hand-to-hand combat, champion of Belarus in pankration in 2020. In sports for 15 years, and in the ring he is just a machine!

This fight lasts the entire allotted time and shows no visible signs of advantage for either team. Every time a new fighter rushes in, the stakes get raised and the clash becomes more dynamic. Belarusians have a variety of techniques and tactics. A powerful, but reasonable Mishkevich, a true hunter Masalsky – concentrated and well-aimed, and finally Rozhkov – a cocky bully, every time lashing out on an opponent like a dog released from the chain. However, the team of Ukrainians has more collective fervor and experience. The tattooed giant Robert Vorobyov calmly dominates the ring, while Yegor Kostyuchenko blows his rivals into the ground like a tornado and floods with an avalanche of blows, and the wild Dima Gritsenko repeatedly sends the Belarusians into the audience one after the other. After one hell of a 20-minute fight, by unanimous decision, the Puncher Boxing Club is declared victorious! The Belarusians, as debutants of the 3×3 format, yearn for revenge and promise to prepare more thoroughly.

After such a fascinating spectacle, it would seem that it is worth taking a breather, but there is no time! On Wednesday, May 26, the Octagon is crowded once again. We will have a chance to follow two powerful pairs. The first match is between former Pit Bull Fight participants: the intellectual Vladislav Grigoriev and the football hooligan Artem Maloletnikov; Muay Thai against K-1. In the second part of the stunning Marlezon ballet, two ultras – Serhiy Kolesnik, representing boxing, against the aggressive MMA fighter Maksym Maslyuk. Even your monitors will crackle with the energy!

All fights from all seasons are on the official Pit Bull Fight Youtube channel: