In the legal field: how bloggers did an illegal photo shoot with the legal GREEN ENERGY™

The “perfectly legal” energy drink GREEN ENERGY™ has repeatedly urged its consumers to look at the world more broadly, to break free from the trivial and the mundane. At the end of July, the brand did it quite literally, arranging a fun photo shoot with popular bloggers in a real hemp field, for the first time in Ukraine! The idea of the project belongs to the marketing team of New Products Group, and the ODDEE agency helped with implementing the idea.

“We decided to play on our audience’s healthy sense of irony. We wanted to try having a bit of fun and play with the audience, while discarding the over-used and endless dominance of lavender, tulip and rapeseed fields, which usually flood the social media. So, on the one hand, we tried to hint that instead of copying someone else, people can try using their own imagination and go the extraordinary way, interpreting the trend in their own unique style. On the other hand, we just wanted to show that there is nothing provocative about the hemp plant, which is actually a traditional agricultural crop in Ukraine and is still grown as a useful raw material”, commented Elena Selyutina, PR Director of New Products Group.

The idea of ​​a “hemp photoshoot” proved to be inspiring for some of the most popular Ukrainian influencers. Samvel Tumanyan, Maksym Smirnov, Otis, Glory, Anton Murafa, Dasha Savina, Nadiia Shnaider and Leya Vierich gladly agreed to appear on camera on this beautiful July day. The organizers chose very carefully who to work with, as this project reflects the very ideology and worldview of our freedom-loving brand. Therefore, charismatic individuals were invited to the photo shoot, personalities who express themselves freely, reflect independently and express themselves boldly, because they value personal freedom above all else.

Shortly after the photo shoot, colourful photos and videos were published in the bloggers’ posts and stories, as well as on the official Instagram page of GREEN ENERGY™. The participants of the project willingly commented on their own attitude to stereotyped thinking and interpreted the concept of freedom at their own discretion, encouraging subscribers to continue the discussion. Thanks to the genuine interest of bloggers in this topic, they not only agreed to work with the brand on the most friendly terms, but also spread truly organic content, which really resonated with users.

“This is not the first project we are implementing for GREEN ENERGY™. For the first time in Ukraine, we sent bloggers for a photo shoot in a cannabis field. It seems to me that many people did not even know that there are such fields in our country, and even legal ones. All our activities are aimed at dispelling stereotypes. The hemp leaf is not just a drug, as many people usually think. The fields look amazing, and even five hours of driving did not spoil our mood. In addition to the agreed activities with the bloggers, we also got tagged in their stories as a bonus”, commented Alina Tsyganok, Creative Director of ODDEE agency.

This campaign continues GREEN ENERGY’s fight against societal stereotypes and myths about cannabis. Only this year, the bold Instagram project “Your Legal Weed at Home” was implemented, in which nine famous media personalities received their own “island of freedom” in the form of a real grass lawn. Earlier, a special project was launched with bloggers, in which they symbolically burst a giant inflatable ball with a drink can inside to demonstrate their attitude to unreasonably “inflated” stereotypes about cannabis. Such artistic performances have already become a good tradition for the brand, which tirelessly encourages the audience to go beyond the ordinary, boldly show individuality and be progressive in the perception of modern achievements.

Photos from the hemp field photo shoot can be found on Instagram under the hashtags #GreenEnergy and #energylegalized. GREEN ENERGY continues to change perspectives, fight clichés and break stereotypes, full of tireless evergreen energy! 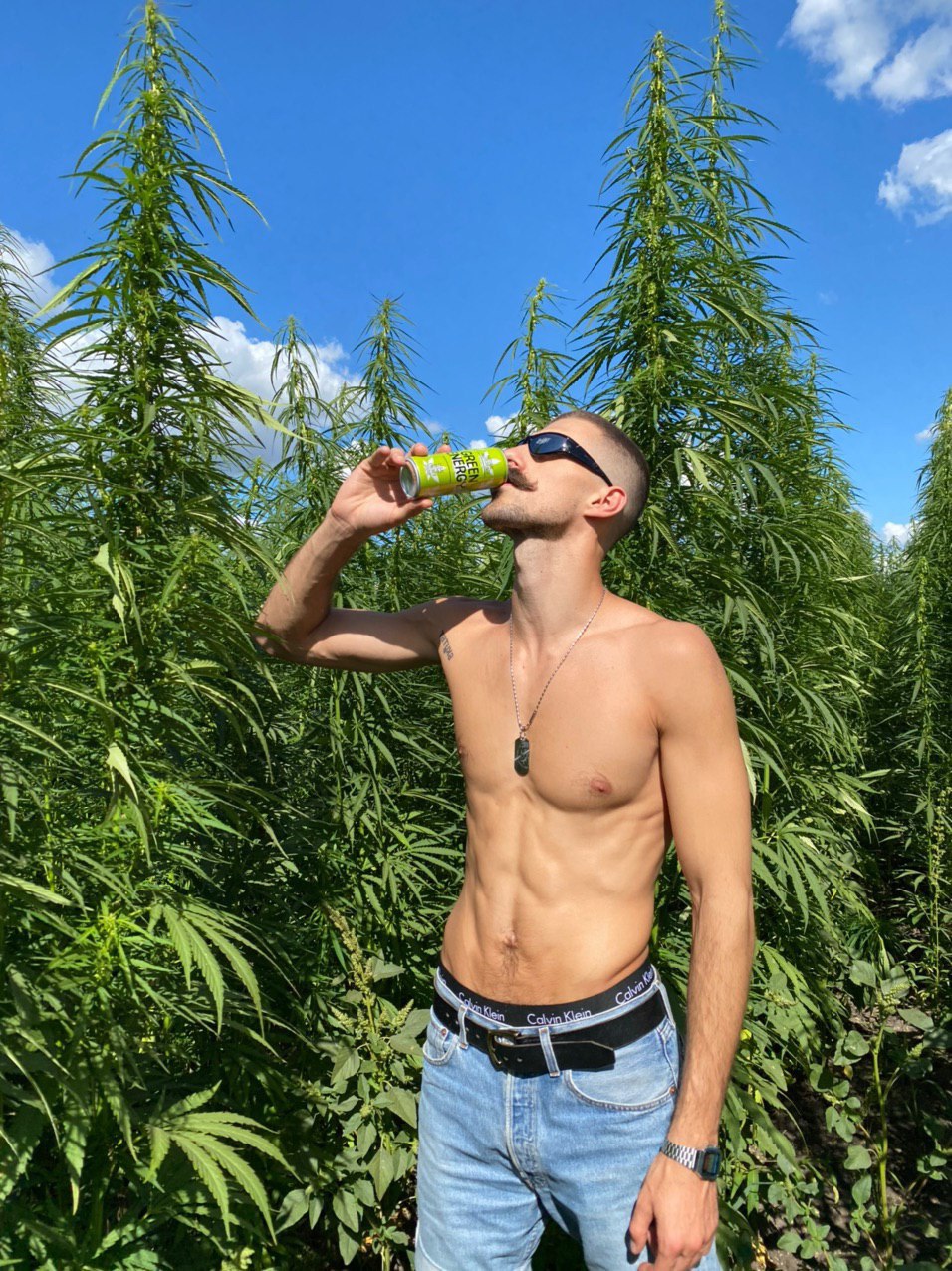 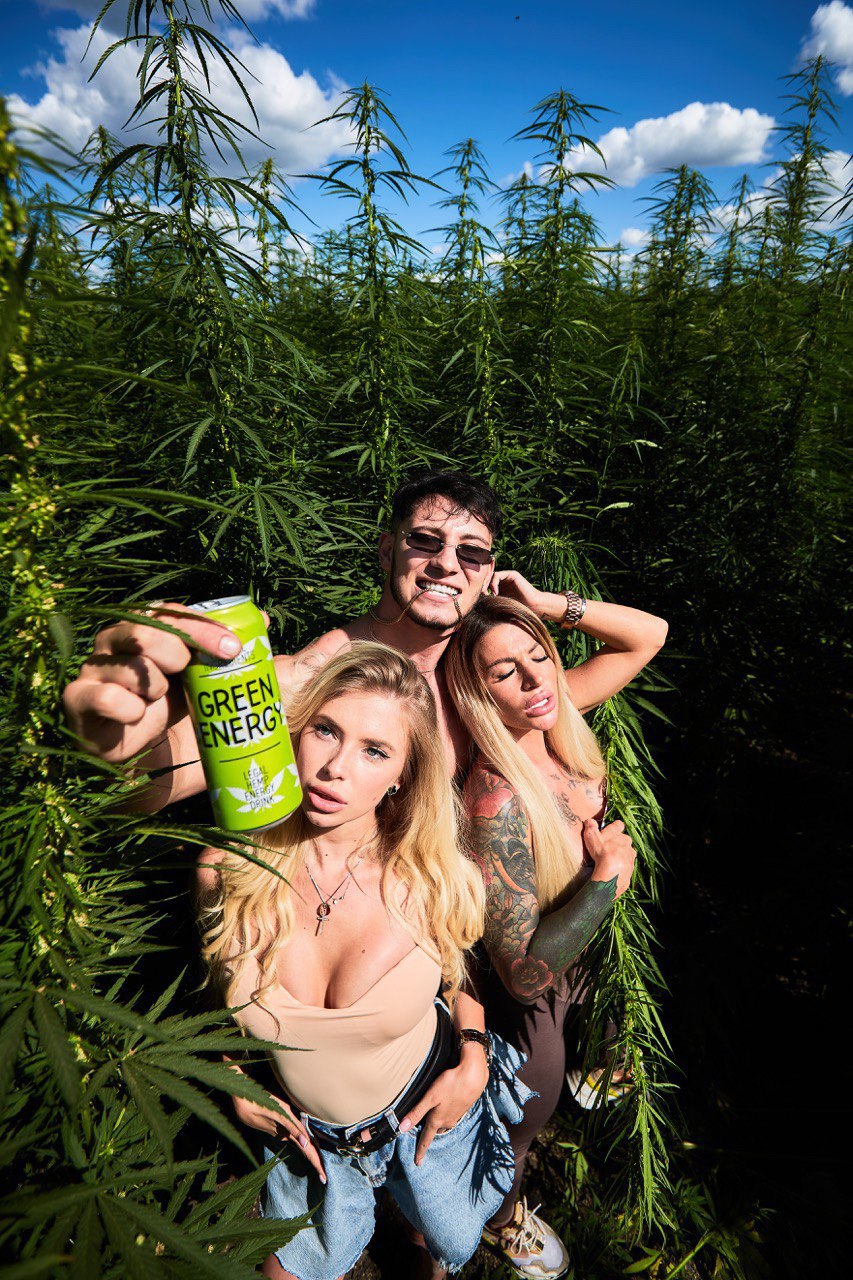 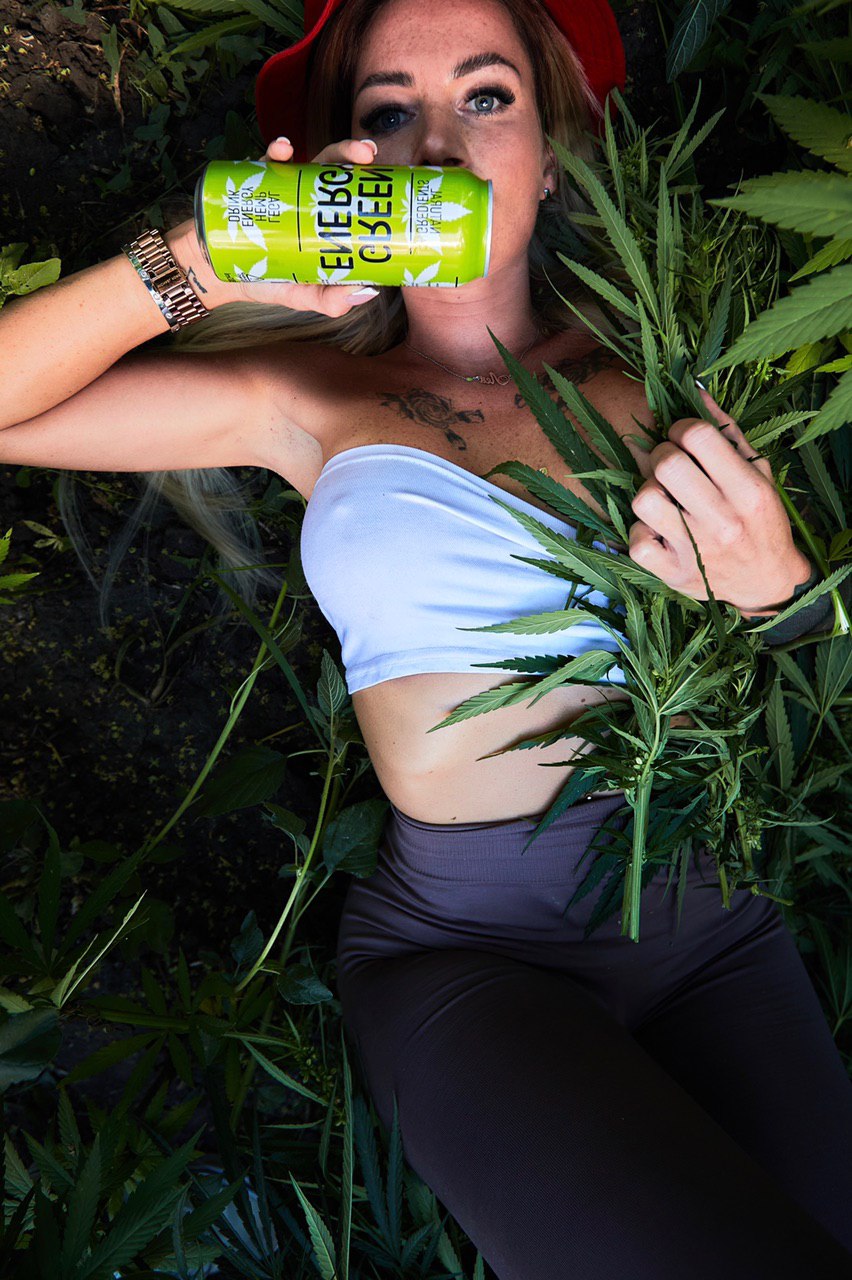 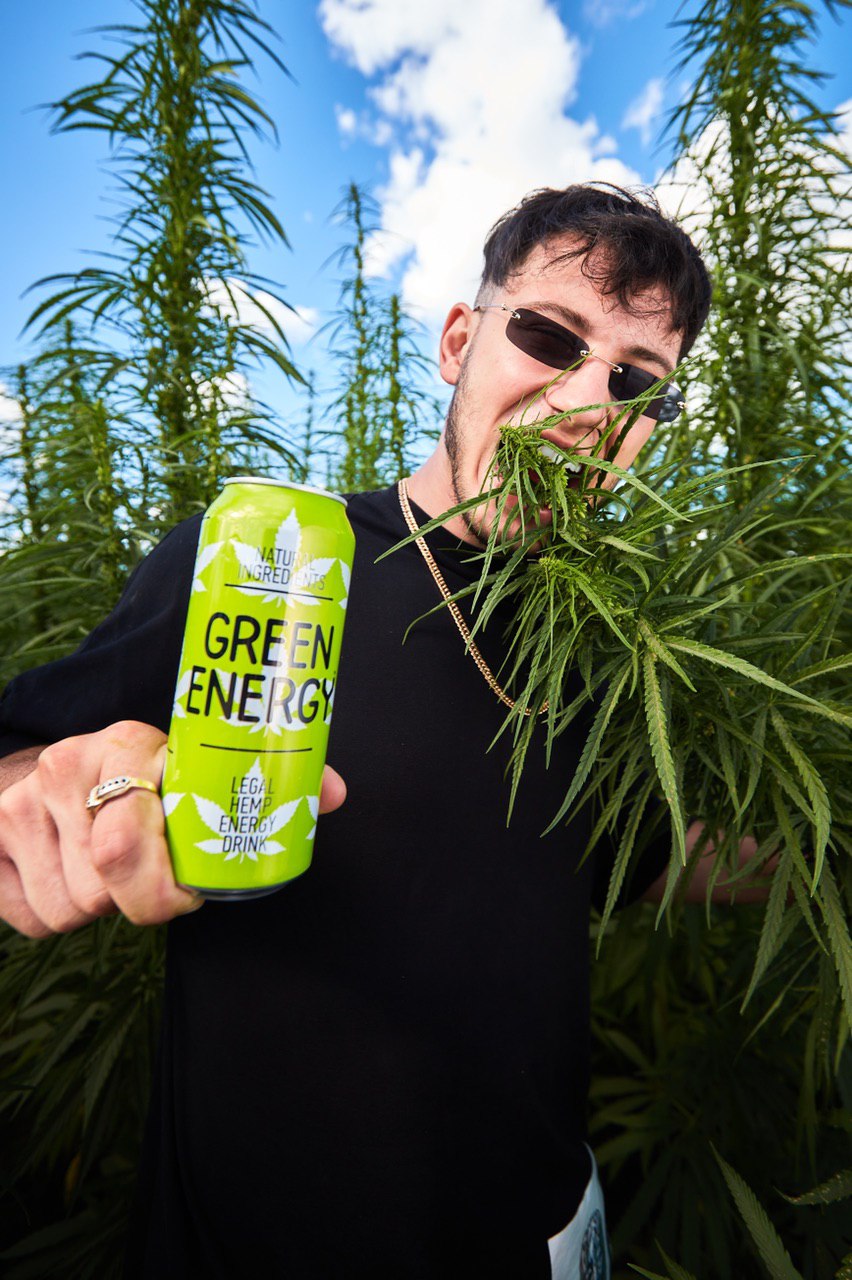 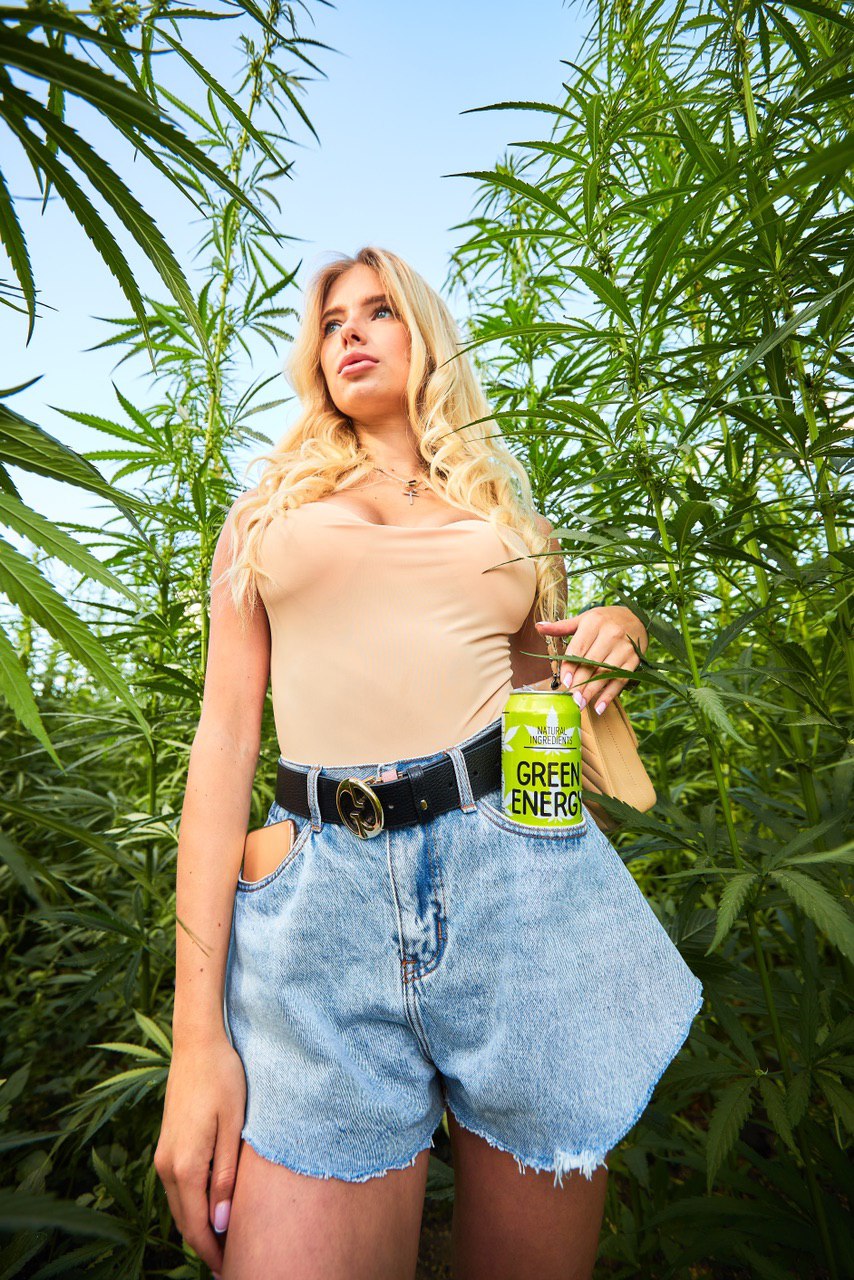