The NON STOP™ slogan “Energy Can’t Be Stopped” turned out to be prophetic for TS/D (Tough Slate Design), the creators of the new concept for the legendary brand. The well-known Ukrainian agency won the prestigious international design award European Design Awards, which was awarded on June 8 in Warsaw. The silver award in the category Motion Graphics went to the “invention” project and realistic visualization of the perpetual motion machine, which was powered by the can of the energy drink. 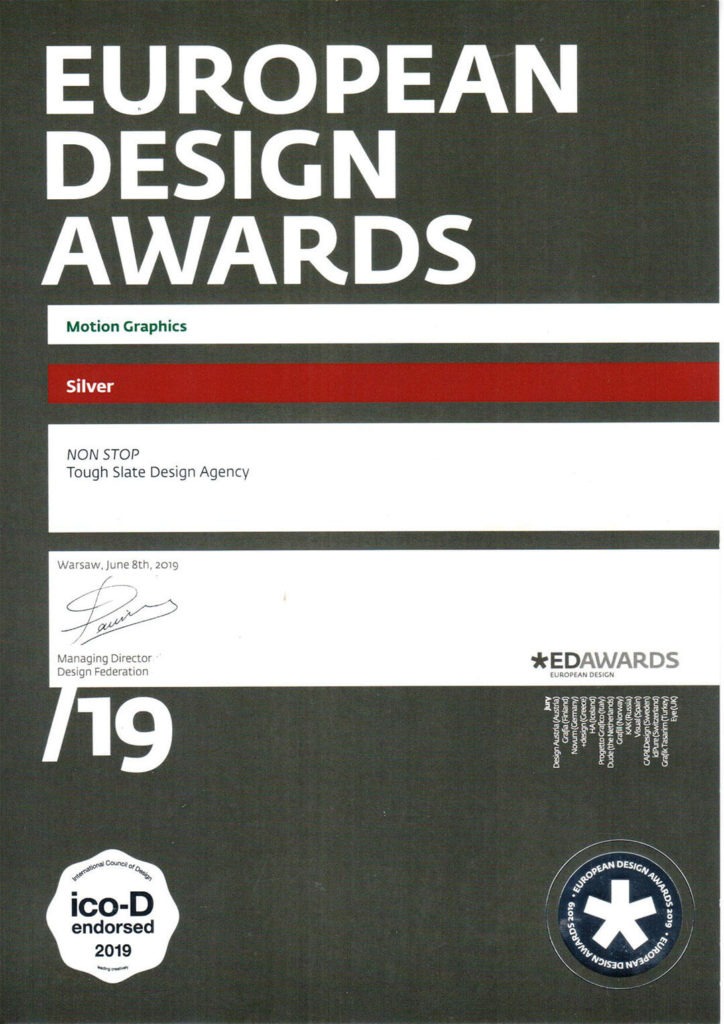 The words of Dmitry Tsapko, art director and founder of Tough Slate Design Agency, served as the basis for the official description of the project on the European Design Awards website: “The perfect combination of endless energy and a positive effect on the body prompted the idea of creating a perpetual motion machine with precise interactions and unending quality of energy. Depending on the flavour, Urban or Jungle, we find ourselves at an afterparty at night or on a street loaded with traffic. In both cases, NON STOP™ allows you to be energetic and, by factoring in all the subtleties of those moments, resist fatigue and stress.”

The new concept for the brand NON STOP™ was developed in the spring of 2018. The main task was to acquaint the consumer with two new flavours – NON STOP Jungle and NON STOP Urban – in the style of the new brand idea: “NON STOP™ is an uninterrupted source of energy”. The idea was brilliantly embodied in the videos, which depict impeccably organized movements made of metal NON STOP™ cans. Interestingly, these videos, like the NON STOP™ drink, affect the human psyche: they relieve stress and help streamline thoughts.

European Design Awards is a prestigious international design award, which has been awarded to the best European agencies for over 12 years. The peculiarity of the festival is that the jury consists exclusively of representatives of reputable industry publications. This year, the number of applications submitted has beaten all the previous years.

“We congratulate our long-time partners on receiving such a significant professional award, and we are proud that it was our brand that turned out to be at the center of their creativity, which did not leave the international jury indifferent . The success of our team of co-creators once again proves that our company has a special instinct for the promising trends that are on the rise, and fresh ideas that are about to become big. We wish our creative friends to have more extraordinary new ideas, and hope for more incredible collaborations in the future”, – Elena Selyutina, PR Director of New Products Group, congratulated her colleagues on behalf of the entire company.

This summer, we launched a new advertising campaign for NON STOP™ with the updated concept of perpetual motion, which “moves your day”, as evidenced by the slogan. The creative team of TS/D also worked on the visual concept. On billboards in Ukrainian million cities and in commercials on national TV channels, you will see an intricate mechanism consisting of a large number of household items, and it is NON STOP™ that helps all elements to move in a careful, methodical and consistent manner.

We also remind you that at the end of May, another common project of the TS/D agency with New Products Group received the gold award of the Ukrainian Design National Competition: The Very Best Of 2019 in the Motion Graphics of Advertising Spot category – the creative tornado called Why Not Absurd Video. A series of vivacious youth-oriented videos offered the audience a funny word game against the background of the sound of the WHY NOT™ can opening, reflecting the free thinking of the young and cheerful target audience, who iterates over various meanings in order to invent something truly unique.