Monthly creation of new projects, attracting new donors, distributing information about the demand for blood and its components – this and much more is an integral part of the charity initiative “Kraplya do Kraplі”. It was founded in October 2020 by two partners – the DonorUA project and the “Pryrodne Dzherelo” brand. Each new event or awareness campaign provides an opportunity to get more and more people involved in regular free and voluntary donation. A single donation can save up to three lives, and such initiatives bring thousands of donors together each month. 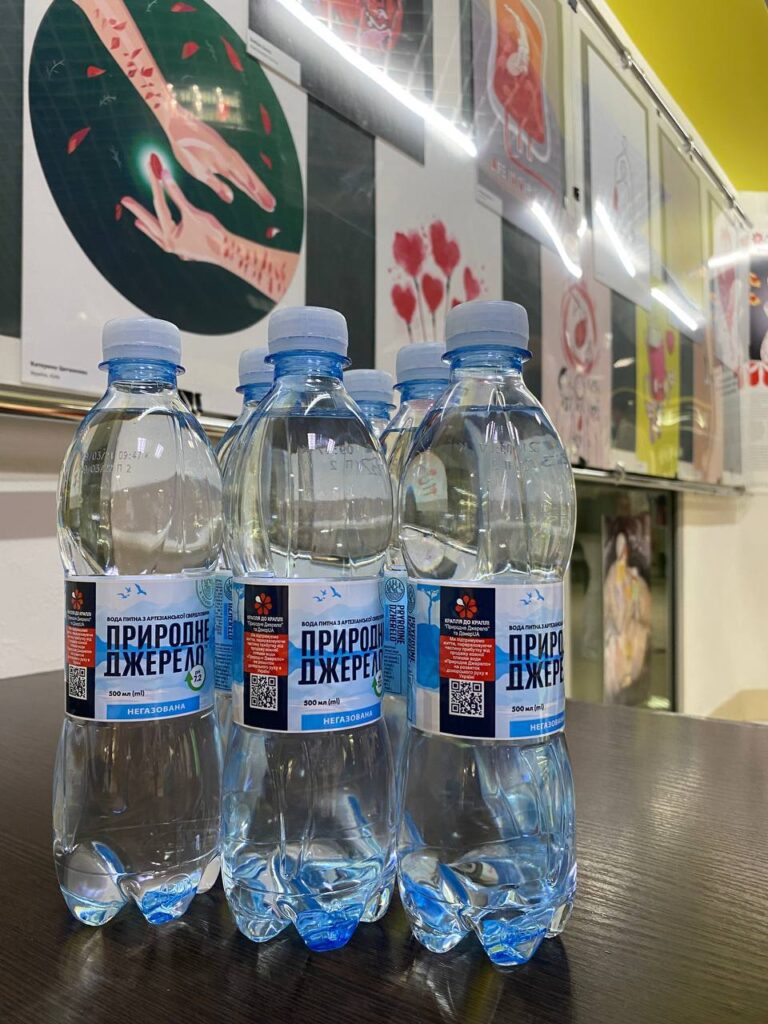 The project aims to comprehensively support the desire to save lives. Donors in the blood centers are provided with a half-liter bottle of “Pryrodne Dzherelo” artesian water after the procedure. This campaign is already in place in Kiev, Dnipro, Kryvyi Rih, Nikopol, Kam’yanske, Lviv, Odessa, Kharkiv, Zhytomyr, Mykolaiv, Chernivtsi, Vinnytsia and and Cherkasy. Moreover, thanks to the “Kraplya do Kraplі” initiative, an alternative mechanism of charity was created: a part of the funds from the sale of each bottle of “Pryrodne Dzherelo” water with special marking goes to the development of the donor movement. As of today, the project has attracted over 10 146 donors, saved 30 438 patients and collected 1 495 121 UAH.

As part of the initiative, the teams actively conduct informational and educational activities. A nationwide survey on blood and blood components donation was completed in September. During two months the information was collected – we received 3188 filled out questionnaires from people from all over Ukraine. Digdata experts have already begun analyzing data to predict and develop improvements in the state of blood and blood components donation in Ukraine. The project was joined by the Ministry of Health of Ukraine, A. Shalimov National Institute of Surgery and Transplantology, IDonor: All-Ukrainian Donor Platform, Zdaiblood, Agents of Blood, “Sho Tam”, Gurt and others. Regional news channels, including Zaporizhya, Mykolaiv, and Ivano-Frankivsk, also participated. Furthermore, the initiative has also attracted the attention of TV representatives. The results will soon be made public. 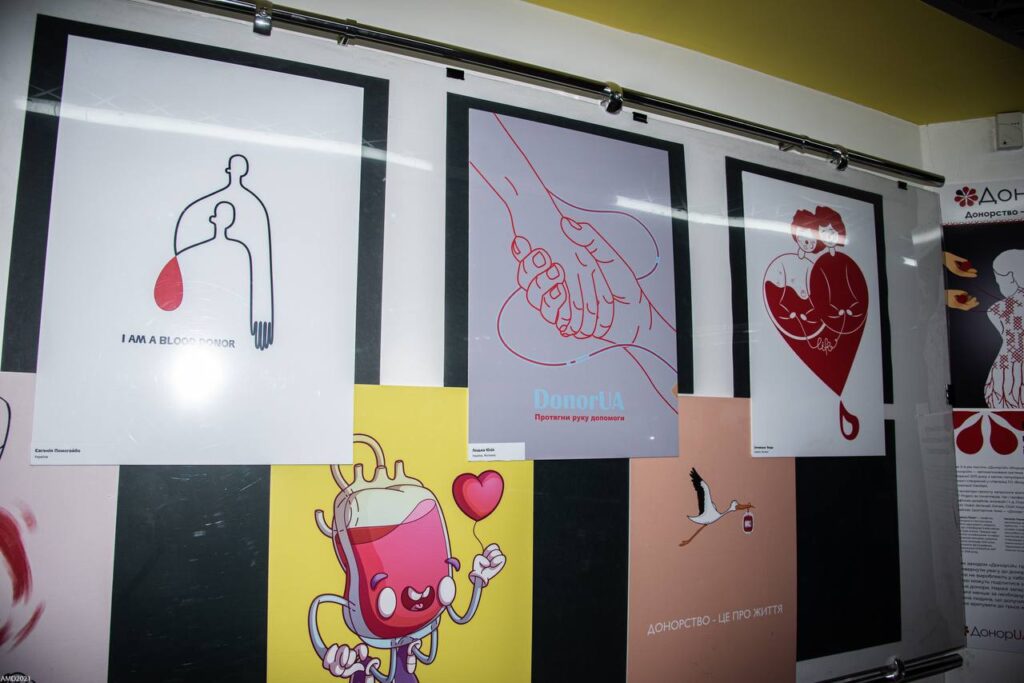 Moreover, the initiative “Find out your blood type”, which was organized with the assistance of the Rivne regional center of blood service, was created. Also among the people willing to join the initiative were parents with kids, who wanted to know their blood type and teach their children that donation should be an integral and regular part of life. The volunteers presented certificates for free coffee in the shopping mall “ZLATA PLAZA” to all the event participants, who registered on the DonorUA platform. As part of the project “Kraplya do Kraplі” all guests received the water “Pryrodne Dzherelo” as a gift. And among those who made publications from the event with the appropriate tags, there was a raffle of 3 power banks. Through this event, the teams drew attention to the issue of donation in Ukraine through the prism of art, aesthetics and culture and engaged even more people in charity. 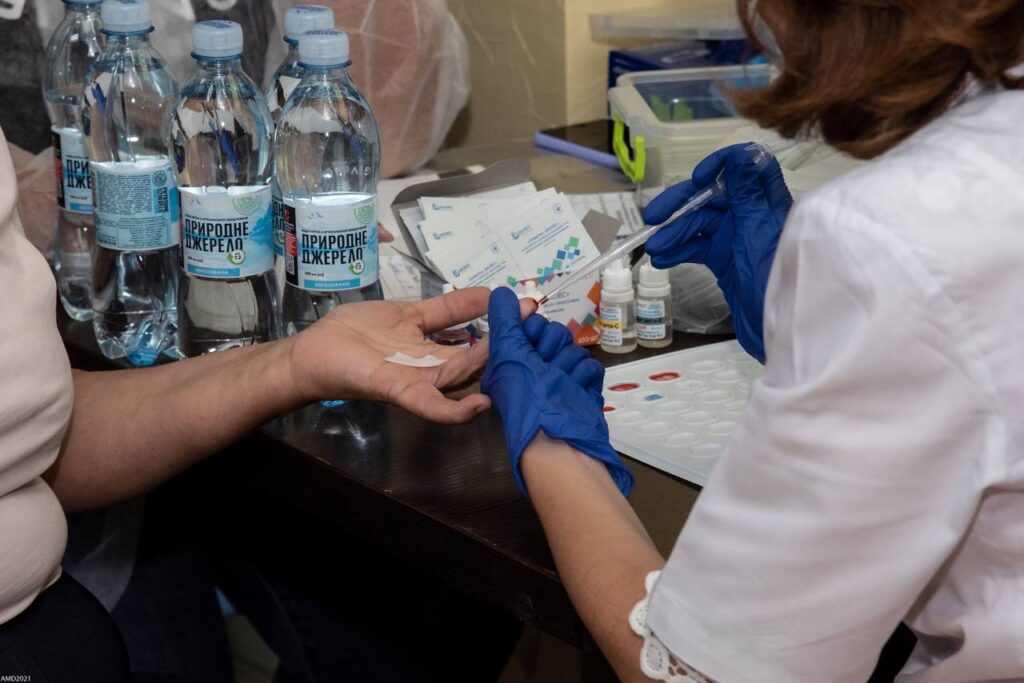 And on September 22, thanks to the efforts of the DonorUA team, the Dnipropetrovsk Regional Blood Transfusion Station was visited by 62 donors. At the event, everyone could take professional photos in the photo area, and received free sweet treats and artesian water “Pryrodne Dzherelo”. The event, which not only helped to unite donors, but also saved many lives, was organized by the “DobroDiy” charity exchange, the “DuIT” public organization, the Ukrainian Red Cross Society in Dnipro, the Dnipropetrovsk Regional Blood Transfusion Station, New Products Group and others.

On September 26, the online event TEDxKyivLive 2021: The Case for Optimism was held, which brought together experts in the fields of climate, technology, psychology, urbanism, science, economics, and so on. One of the main topics was defining a strategy for a better future for Ukraine. At the event, the DonorUA and Grupotest teams organized a blood typing station, where, among other things, they disseminated information about the “Kraplya do Kraplі” project and opportunities to join the development of the donor movement. More than 65 people wished to find out their blood type and take pictures in the photo area. Some people have already been donors, while others were thinking about it for the first time and decided to register on the website. TEDxKyivLive 2021: The Case for Optimism was an event that inspired both thinking and action, bringing people together as well as called for change for the better.

Such events help to significantly improve the situation with the shortage of blood in the country. In fact, now in Ukraine there is a serious problem with the lack of regular donation. According to WHO recommendations, 31,5 blood donations per 1000 of population are needed to meet the need for donated blood. Ukraine has an acute shortage of donated blood, currently 11-13 donations per 1000 of population. That is, to meet the needs of patients, 2 million people must donate blood. Currently there are over 40 000 registered donors on the DonorUA website.

During the year the DonorUA team attracts donors, and by June every year it sums up the results – identifies active, honored, regular donors and donor-ambassadors and awards them at the DonorUA Awards event. To organize such an event, volunteers involve a huge number of people. The partners and sponsors of this event in 2021 became Radisson Hotels & Resorts, Gelius, New Products Group and SOCAR Energy Ukraine. The DonorUA Awards video was released in September.

«If you have no temporary or absolute contraindications, if you want to make a significant contribution to society and may save someone’s life, and maybe even more than one life, we welcome you to our friendly donor family. Donation is not just charity, it’s a way of life. It only takes one blood donation to understand this. And who knows, maybe in a year you will be invited to the DonorUA Awards as a honored guest. But if you do not have the opportunity to become a donor, but you want to help, we suggest you use an alternative mechanism of joining this extremely important cause – by purchasing the water “Pryrodne Dzherelo”. In this way you can make an equally important contribution to the development of donation in our country», – says Elena Selutina, Communications Director of New Products Group, producer of drinking water “Pryrodne Dzherelo”.

DonorUA Art Project, informational and educational campaigns, the Art of Donation project, assistance with corporate donor days, blood types identification – these are only a small part of the activities of the “Kraplya do Kraplі” charity initiative and the DonorUA movement. There is a titanic effort behind it.  However, the goal is worth it. Teams are already preparing events for October. It will be possible to join them in Lutsk, Dnipro, Kharkiv, Ternopil and other cities.

You can follow all the latest news on the official Facebook page and DonorUA website. With every drop we get closer to the sea of life!