А natural source of life: the charity initiative “Kraplya do Krapli” continues to inspire Ukrainians and save patients

The famous Scottish writer and social activist Walter Scott said “The race of mankind would perish did they cease to aid each other. We cannot exist without mutual help”. Today, helping people in need is easier than ever before: funds and organizations are creating all the conditions for charity to become not just a common thing, but even a routine activity for everyone. One of the projects aimed at helping and saving lives is the charity initiative “Kraplya do Kraplі”. It was established a year ago, in October 2020, by two partners – the DonorUA movement and the “Pryrodne Dzherelo” brand.

Regular campaigns and active awareness activities help to involve more and more people in regular free and voluntary donation. There is a positive change in the volume of blood and blood components procurement in Ukraine. Thus, the number of donations in 2021 has grown to 13 per 1000 population. To compare, in 2020 the figure was 12 donors for the same number of people. According to WHO recommendations, 31,5 donations per 1000 population are needed to meet the need for blood donations. That’s why it is necessary to continue active work to popularize donation.

Over the year of its existence, the “Kraplya do Krapli” project has achieved significant results, proving its long-term potential and benefits both for the donor movement and society as a whole. Together we are improving the situation with reserves of donor blood, which can be needed by someone at any moment of life. Moreover, absolutely everyone has the opportunity to join the charitable cause, even without the possibility of being a donor as well. Thanks to the “Kraplya do Krapli” initiative, you can make your contribution just by drinking “Pryrodne Dzherelo” water with special markings – part of the money from its sale will be transferred for the development of donation in Ukraine.

As of today, the efforts and caring attitude of everyone who joined the project helped activate more than 10 900 donors, save 32 700 patients and collect 1 600 000 UAH for the development of donation. 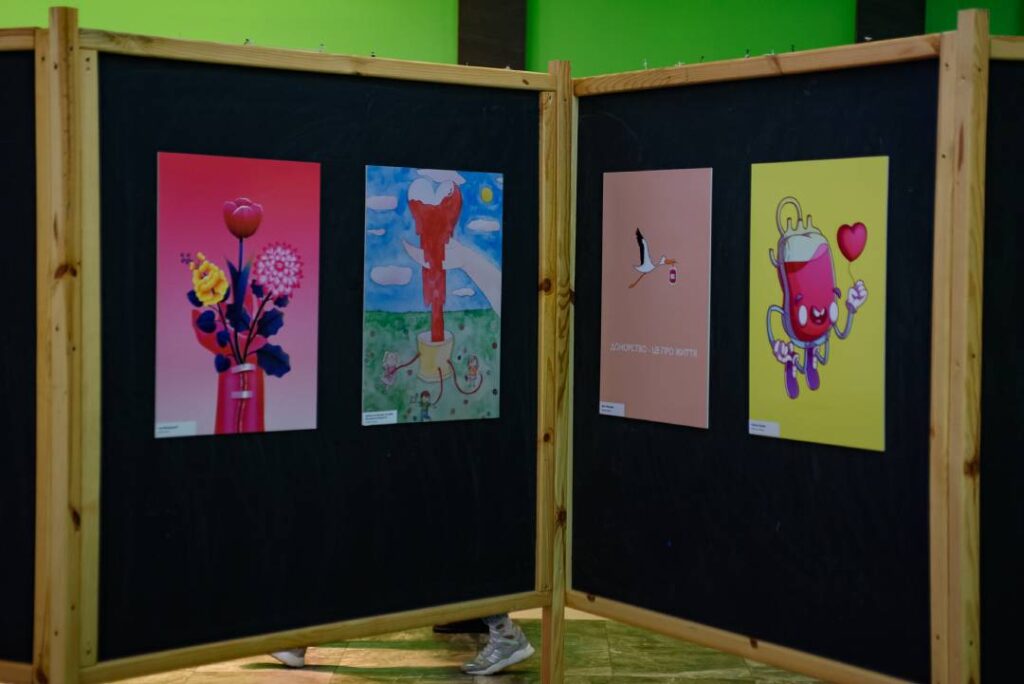 October 2021 was extremely productive for the project team. The exhibition of the best works of the III International Festival Contest DonorUA Art Project was held on October 1-14 in Lutsk in the “PortCity” mall. During the event, the initiative “Find out your blood group”, which involved 50 people, was organized with the assistance of CE “Volyn Regional Center of Blood Services”. Everyone who took part in the campaign received an eco-bag from “PortCity” mall and a bottle of “Pryrodne Dzherelo” artesian water. The event helped to bring the citizens together and reminded them once again about the need of blood and blood components for patients. Thanks to communication with visitors of the exhibition, the team received a lot of feedbacks and new ideas for the development of the project.

The Action! Forum, which is a continuation of the youth program “Art of Changes: Youth and Democracy” of the National Center “Ukrainian House” and is implemented with the support of the U.S. Embassy in Ukraine was held on October 7. The event was very productive: social, educational and cultural initiatives were pitched to the audience. The program of the youth forum included a variety of activities, including the opportunity to identify the blood group from DonorUA and Grupotest, to hear about the “Kraplya do Krapli” project, and to find out how to become a part of it and influence the situation with donation in the country. The culture of donation should be taught from childhood, as this is the only way to spread the idea of safety and necessity of regular donation both for one’s own health and for saving patients. Attention and interest to the topic of donation expressed by dozens of schoolchildren and students, who attended the event, became an indicator of great prospects for further development of the donor movement.

Soon, on October 15, more than 20 donors visited the Museum dedicated to the Civil Feat of Dnipropetrovsk Oblast during ATO Events in Dnipro to donate blood and join the efforts to save lives. With the support of the “Dnipropetrovsk Regional Blood Transfusion Station” everyone could identify their blood group, to analyze it and make donations. The procedure was accompanied by live music performed by a bard and soloists of the First Volunteer Choir. Everyone who donated blood received sweets from the Ukrainian Red Cross Society in Dnipro and a bottle of “Pryrodne Dzherelo” artesian water.

On October 15-21 the best works of the competition-festival regarding blood and blood components donation issue were presented in “Podolyany” mall in Ternopil. Thanks to the placement in a large shopping center, hundreds of people were able to explore the topic and delve into the essence of the issue. And visitors who distributed photos and registered on DonorUA’s website had the opportunity to participate in a draw for a number of gifts.

At the end of October the charity donor project “Kraplya do Kraplyi” became the General Partner of an extraordinary event – a video opera concert by the outstanding Italian tenor Vittorio Grigolo, dedicated to the performances of Enrico Caruso. The presentation of the new international project “Tanto La Vita” was held on October 25, dedicated to World Opera Day. The organizers aimed to popularize opera among all the population as well as to promote through classical music the ideals of solidarity and friendship between nations, the development of their musical culture and respect for each other’s aesthetic values. An outstanding achievement for the charity donor initiative “Kraplya do Krapli” became the highest praise for the project’s activities received from Vittorio Grigolo and the “Tanto La Vita” team.

On October 27, the Klitschko Expo in Kiev hosted an event called the Halloween Blood Donation organized by the American Chamber of Commerce in Ukraine. Visitors had the opportunity to take an express test from “Dila”, to determine the blood group, to analyze it and to donate blood. In a pleasant atmosphere guests enjoyed delicious treats with special holiday symbols, listened to relaxing music, registered on the site, discussed further plans, and were interested in the bonus program and activities of the “Kraplya do Krapli” project. More than 70 people wished to help attended the event, but only 40 of them were allowed to donate blood due to some circumstances. Thanks to the event it was possible to collect almost 18 liters of blood, which significantly improved the blood reserves before the holidays and weekends. Each such initiative brings results: saving lives and involving new people into the big donor family. So, every day nearly 100 people are registered on DonorUA website, and each of them can save three lives.

On October 28 more than 48 donors came to the “Dnipropetrovsk Regional Blood Transfusion Station” in Dnipro. They received treats and sweets, a bottle of “Pryrodne Dzherelo” artesian water, certificates and pleasant gifts from the partners of the event. Event participants had the opportunity to get their pictures in the Halloween thematic photo area to keep the brightest moments in memory. 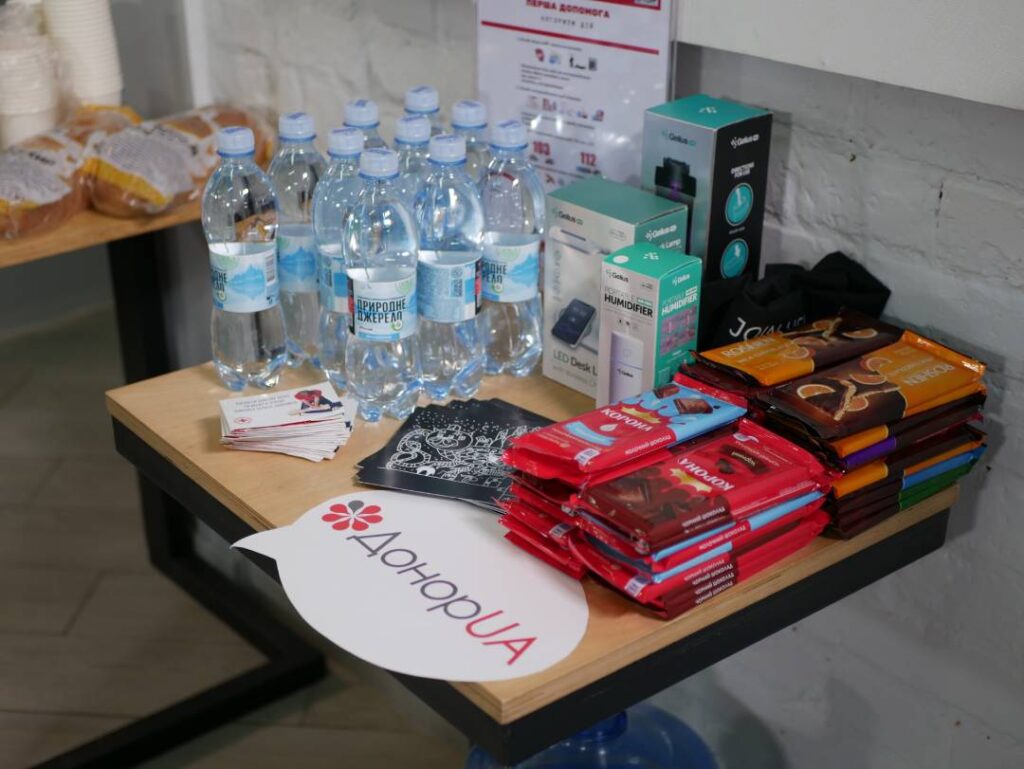 And the very next day, on October 29, dozens of people visited the “Nakipilo” press center in Kharkiv to share their blood with patients. DonorUA team in cooperation with partners prepared a rich program and got the attention of regular and new donors who donated blood under the accompaniment of guitarist Bogdan Borodin and vocalists from the vocal studio BRAVO. Everyone received sweets from the Kharkiv Regional Organization of the Red Cross Society and a bottle of “Pryrodne Dzherelo” artesian water. Mikhail Golinsky held a quiz, and professional artists memorialized the action in caricatures. All visitors were able to enjoy a video exhibition of the best works of the III International Festival-contest DonorUA Art Project, which was demonstrated on the screen.

The charity initiative “Kraplya do Krapli” broke stereotypes about donation and proved that anyone can join a good cause, and it’s not hard at all. The annual achievements of the project have proven that there are a lot of wonderful people in Ukraine, whose joint efforts can lead to positive change. You can follow all the news of the initiative on the official Facebook page and DonorUA website.